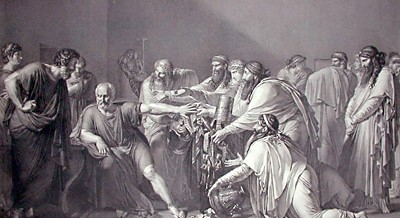 Hippocrates is widely acclaimed today as the “Father of Medicine”. M.D.s take the Hippocratic Oath when they are about to enter medical practice. We all know the name, but who was the man?

Hippocrates was a physician born in 460 B.C. on the Greek island of Cos. He had an investigative mind and disproved the common beliefs of the day – despite strong opposition from the governing authorities who sentenced him, as a young man, to 20 years in prison. Rejecting superstition, religion, and magic, he taught that disease is caused by transgression of the laws of Nature, that medicine can only be practiced scientifically, based on facts, observation and study. Believing that the body must be treated as a whole and not just a series of parts, he was the first physician to use diet, fresh air, medicinal waters, herbs and exercise in the treatment of disease – and with outstanding success.

Hippocrates accurately described disease symptoms and was the first physician to catalogue the symptoms of pneumonia, as well as epilepsy in children. He was the first to categorize illnesses as acute, chronic, endemic or epidemic, noting that there were individual differences in the severity of disease symptoms and that some individuals were better able to cope with their condition than others. He was also the first physician to hold the belief that thoughts, ideas, and feelings come from the brain and not the heart as others of his time believed.

After years traveling throughout Greece treating the full range of human ailments, Hippocrates founded a medical school on Cos to teach his ideas. This revolutionized medicine in the ancient world, establishing it as a discipline, a respected profession, apart from fields like philosophy or religion that it had traditionally been associated with.

He compiled a list of 400 herbs that he found curative, half of which are still used by herbalists today. Regarding medicine as an art that must be practiced with the utmost integrity and openness to new ideas, he developed an Oath of Medical Ethics for physicians to follow. Today a modernized version of the Hippocratic Oath is administered in the graduating ceremonies of most Western medical schools, serving as an ethical guide to the professional life of the medical doctor.

Though Hippocrates is honored as the “Father of Medicine,” if he were living today, no doubt he would be labeled a Naturopath, and, most likely, he would be disregarded or limited in his work by those who now claim him as their patron saint and swear to the oath that bares his name.

Hippocrates, in his own words: