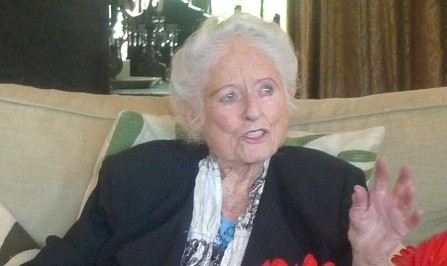 The list of cancer fighting foods is long with things like mulberries, teas with flavonoids, cruciferous vegetables and ginger. But the most powerful anti-cancer tool comes from within, says the notable Dr. Valerie V. Hunt, best known for her pioneering research in the field of bioenergy.

The 95-year-old dynamo, a research scientist, author, lecturer and Professor Emeritus of Physiological Science at UCLA, recently visited the home of Dianne Burnett to talk about cancer and what she calls the new health paradigm.

“As long as we have to treat (cancer) with something extra, we’re on the wrong track,” Hunt says. “Certain things will help the body to withstand and handle cancer but it never cures cancer. Cancer is created by the human being from lacks in his energy field and his emotional orientation. That’s my premise.

Bioenergy is also the expertise of Dr. Janet Hranicky, Founder and President of the American Health Institute and a member of the Board for Joan Valentine  - A Foundation for Natural Cures, Inc. For 25 years she ran the longest-running Psychological Intervention Program for cancer in the world with Dr. O. Carl Simonton, a radiation oncologist best known for his pioneering insights and research in the field of psychosocial oncology.

Hranicky says, “Sometimes with these wonderful things, whether it be the mulberry or other marvelous things that we see that have come out of the jungles in different areas of the world, we will often see people improve and get better with their symptoms. And we will even see, from all clinical evidence, cancer go in remission and not even be picked up on any of the scans. But it doesn’t mean that the field has changed. If the field has not changed in this way of thinking, the person would still have a cancer field and that’s when we see a recurrence of disease often.

“It might be a year or two or three. The typical way to treat it has been to take the cancer out, to radiate the cancer, to use drugs to kill the cancer. While those can be very effective, what we know is there is not a not a shift in the field that Valerie is talking about. You’ve only short-termed cured it.”

That’s something Burnett knows all too well. When her mother, Joan Valentine, was diagnosed with esophageal cancer it basically came with a death sentence.

“They told my mother right from the beginning that she didn’t have a chance to go and get her stuff in order,” Burnett said. “You’re giving her radiation. You’re giving her chemo but you’re not giving her the hope and the chance for her to get better so she quickly declined and passed away nine months later.

“I was there every two weeks giving her that hope, and of course the family (was too) but when you’re seeing a doctor who she put all of her trust in is saying, ‘You don’t come back from Stage IV esophagus cancer,’ where is her hope and faith in getting better?

That, Hunt says, is why the responsibility falls upon the patient – not the doctors.

“When someone else is doing it for you, you’re not involved,” Hunt says. “You’re waiting on them to get it done. When you know you’re part and parcel of doing it, then it’s your responsibility and the doctors should say, ‘This is what we can do about it. You have to do this kind of thing.’ That’s an entirely different approach. When the doctors don’t do it and it doesn’t get better, what happens? Depression. They go downhill fast. But when there’s opportunity and there’s a little change, look what happens to a human being. As Jan said, responsibility now comes back to the human for their health. It comes back to them for assisting and that is the new medicine. That is the new health paradigm.” 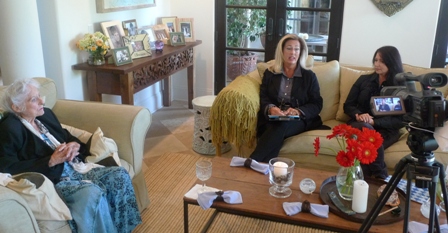 Hranicky attends conferences around the country and notes that while there has been a shift in the desirable direction to substitute better, healthier external things to take and do than from the previous old model, people are still on an external-based platform and approach cancer with the thinking that something outside is going to change and cure them. She says it’s important to go back and re-educate the masses.

Burnett stresses that it is necessary to educate people to the benefits of alternative and integrative treatments that can help build their immune systems and not to rely solely on the poison of radiation and chemotherapy, surgery and drugs.

“We have to start the education in elementary school so people assume responsibility for who they are. The new model of the human being gives us opportunities and capacities which we have never imagined. With those opportunities and capacities, we don’t ever have to have cancer. Ever. It starts early in life. It should be a part of all schooling. Not cancer, but what is the nature of the human being and what is our highest level and what is the greatest capacity that we have to live and to enjoy life and to experience the wonders of life. That’s the approach that we need in schools.”