The importance of GMO labeling

Wouldn’t you like to know if the foods you eat are made with genetically modified ingredients? It seems like a no-brainer yet not everyone agrees. GMOs, or Genetically Modified Organisms, are combining the genes of separate organisms to engineer a new one using DNA technology — and are a hot topic these days. Some GM foods include maize, soybean, oilseed rape (canola), chicory, squash, potato, pineapple and strawberries. GM foods may provide greater resistance to pests and viruses, higher nutritional value and longer shelf life. However, their safety, potential risks and ethical concerns are still being debated.

Regardless of whether you are for or against GMOs we have a right to know what is in our foods. That’s why the Right2Know March, which starts on October 1 at the United Nations in New York City and ends at the White House on October 16 (World Food Day), is so important. The 313-mile march is to demand that genetically engineered foods be labeled in the United States as they are in Europe and Japan. Currently, there is no legislation in Congress to label GMOs. However, there is an initiative campaign underway in California, which is always ahead of the healthy food curve, to get the labeling of genetically modified foods on the state ballot in 2012. Visit LabelGMOs.org for more information. 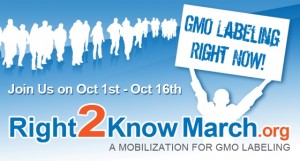 Foods certified as organic or biodynamic should not contain any GM ingredients, according to industry guidelines. According to LabelGMOs.org, what does labeling mean for you and your family?

However, a large and growing body of scientific research and on-the-ground experience indicate that GMOs fail to live up to these claims. Instead, GM crops:

The scientifically demonstrated risks and clear absence of real benefits have led experts to see GM as a clumsy, outdated technology. They present risks that we need not incur, given the availability of effective, scientifically proven, energy-efficient and safe ways of meeting current and future global food needs.

This paper presents the key scientific evidence – 114 research studies and other authoritative documents – documenting the limitations and risks of GM crops and the many safer, more effective alternatives available today.