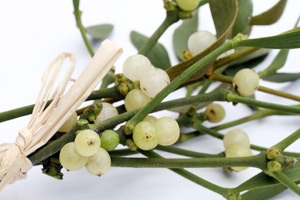 Cancer is a scary diagnosis. There’s no doubt about that. Treatment is not just about removing the tumor and providing chemotherapy (although those are important aspects of healing cancer patients) – it’s about the whole patient. As an integrative oncologist, I emphasize treating the person and not just cancer. I incorporate conventional medicine using chemotherapy, monoclonal antibodies, and targeted therapies with nutritional forms of treatment to create unique therapeutic regimens for my patients.

Recently, Suzanne Somers appeared on The Dr. Oz Show to discuss the cancer treatments she used to treat her breast cancer. One of the adjuvant therapies she discussed was her use of mistletoe extract injections. Although it’s not FDA-approved in the US, it is used in some clinical research trials and occasionally prescribed in Europe by anthroposophic physicians.

Mistletoe is a semiparasitic plant that receives it nourishment by growing on apple, birch, elm, maple, oak, pine and several other trees. The plant contains chlorophyll and is capable of undergoing photosynthesis. Its use extends far beyond being a symbol of an impromptu holiday kiss – it has medicinal purposes as well. It been used to treat medical conditions such as arthritis, epilepsy, hypertension, menopause and even cancer. Mistletoe has a plethora of medicinal applications that date back to Ancient Greece. However, it started to gain attention as a chemotherapeutic agent in the 1920s.

The Science Behind the Effects of Mistletoe

Cancer, in the simplest terms, is a group of cells that are unable to die like normal cells. Our cells go through a process called apoptosis, which means cell death. This is the checks and balances our body uses to remove old cells that may not be up to par. And without apoptosis, old cells, which are not at their optimal state, don’t function as well as new cell. This leads to impaired functions and systems can begin to fail in the body.

Phytonutrients, such as the extracts of mistletoe, have been shown to restore the capacity of cancer cells to die so that they don’t continue to grow unchecked. Laboratory studies have shown that mistletoe extracts are proapoptotic toward cancer cells, meaning that they promote cell death.

Mistletoe also revs up your immune system, a crucial, complex system of cells and organs that are necessary to fight infection and disease, which is important to prevent cancer. Because of its potential therapeutic effects, mistletoe has been categorized as a biologic response modifier, which refers to its ability to fuel the body’s immunologic response.

It’s What’s In (Not Who’s Under) the Mistletoe

Mistletoe is a widely researched complementary and alternative medicinal agent. The majority of the mistletoe extracts that are used to treat cancer in patients originate from Europe; they have a variety of brand names: Iscador (Iscar), Eurixor, Helixor, Isorel (Vysorel), Iscucin, Lektinol (Plenosol) and Abnoba-viscum.

Understanding how mistletoe may help to treat cancer starts with knowing what compounds make up the plant:

Alkaloids are mainly found in plants and some fungi. These are nitrogen-based substances that are found in products such as coffee and vincristine, which is also an anti-cancer drug.

Lectins produced by the mistletoe plant are glycoproteins, meaning it contains both sugars and proteins. This substance can bind outside of cells and trigger biochemical changes within the cells.

Studies on Mistletoe and Cancer

In Germany, the use of mistletoe is widespread as the bill is footed by the health-care system. German researchers performed a meta-analysis in which they reviewed the effects of Iscador, a commonly used form of mistletoe extract, on survival of cancer patients. The researchers reported that the data they examined showed a lower risk of mortality.1

The increasing interest in using mistletoe extract to treat cancer has lead to more and more systematic reviews of human trials. Because it can be difficult to statistically pool these studies due to the varying methodologies, researchers implemented special criterion to include or exclude certain studies. After using eight databases to identify clinical trials in which mistletoe extract was used to treat cancer, one review conducted in 2003 concluded that there wasn’t substantive evidence to support the clinical efficacy of mistletoe extract in cancer treatment.

One of the criticisms of the data reviewed in this study pointed out that while mistletoe extracts have been show to stimulate the activity of molecules such as tumor necrosis factor alpha and interleukins (i.e. interleukins 1 and 6), which that have inhibitory effects on cancer cell growth and metastasis, the data mostly comes from preclinical trials and may not have the same effects on cancer patients in clinical trials.

Another study examined 16 men and women with pancreatic cancer. Because pancreatic cancer is resistant to chemotherapy and radiation, it is associated with a poor prognosis. The pancreatic cancer had metastasized (spread) to either the lymph nodes or other organs. The researchers reported that the subcutaneous administration of mistletoe did not change tumor growth; however, the plant extract did help to minimize quality of life concerns in the patients’ final months.3

Natural killer (NK) cells are white blood cells that make up your immune cells, and they are responsible for fighting foreign cells and cancer cells. Major surgery inhibits NK cell activity. The suppression of natural killer cells in cancer patients may lead to tumor cells spreading. In a clinical trial, the infusion of mistletoe before surgery was shown to prevent the inhibition of NK cell activity.

Mistletoe extract has also been shown to have some efficacy for superficial bladder cancer, and it was not associated with any side effects compared to the use of Bacillus Calmette-Guerin (BCG)treatment, which is a commonly used, effective adjuvant treatment (BCG does have serious side effects).5 However, this study is small and the follow-up limited.

In a review of randomized and non-randomized control trials, the efficacy of a type of mistletoe extract called Viscum album was assessed to determine whether or not it improved on quality-of-life parameters in patients with cancer. The researchers reported that the plant improved on quality-of-life measures such as sleep, exhaustion, depression and anxiety; it also reduced the side effects of chemotherapy and radiation therapy.

An Internet search using the phrase “mistletoe and cancer research” resulted in over 133,000 hits. There’s no doubt of a growing interest in the use of mistletoe as an adjuvant form of treatment for cancer. However, as you scour the Web for information on mistletoe and cancer, understand that not all research is created equally. It’s important to look out for red flags to determine the strength of research and the validity of the findings.

In all likelihood you’ll be reading about research findings through a secondary source such as a newspaper or health website. Here’s a quick list of items to keep in mind as you read news articles or websites:

This should give you an idea of some basic things to consider. As you come across research that may be exciting and holds new promise, be sure to think about these questions.

Panacea for Cancer? Not So Fast.

The medical front on the use of mistletoe is not a united one. There are many reasons for this. Mistletoe extract has been used as an adjunct for  treating cancer because of the anticancer substances it’s composed of. European anthoposophic physicians often prescribe it, and various mistletoe extracts are also marketed. However, It is the variability in the preparation of the extract that also makes it difficult to interpret the clinical findings of studies because the relative proportions of the cancer-fighting constituents differs depending on what brand is used.

Based on review studies, the findings on the effects of mistletoe extract is a mixed bag of results because they include different study designs and variable plant extracts. And while most studies don’t report any serious side effects, other research has reported adverse effects, such as localized reactions at the site of injection, anaphylaxis, kidney failure and ulcerations.

While some studies suggest that mistletoe can slow or stop tumor growth and improve survival in cancer patients, the design of most of these studies are weak. Without strong methodology, research studies are more likely to produce positive results. Consequently, independent reviewers have largely failed to support the efficacy of mistletoe extract use in cancer because of insufficient evidence.

The verdict is still out on the efficacy of mistletoe extract and more solid research is needed to assess its use as an anticancer agent.

In the meantime, let me impart some advice that I share with my patients about health and cancer – the most overlooked of all modalities is what you eat. Because your genes can turn “on” and “off” cellular signals that lead to cancer, eating more natural foods like phytonutrients (plant-based foods) will help to promote turning on the right genes that will lead to a healthier you.

Over the last 30 years, I have studied the mechanism of hundreds of bioactive nutrients on cancer-related gene expression, as well as signaling proteins and transcription factors that also effect these genes. These nutrients have powerful effects on inflammation, hormone regulation, toxin metabolism, cell growth and angiogenesis – all at the level of our gene expression. In targeted nutritional program for my patients, I focus on several areas:

Glutathione, glycine, taurine, black raspberry, garlic, omega-3 and -9 fatty acids, fermented soy products, isohumalones from hops, and phytosterols are just a few of the nutrients which data show are essential for the above areas.

Bottom line: Mistletoe has not yet shown a level of efficacy for me to incorporate it in my armamentarium of bioactive nutrients for cancer.