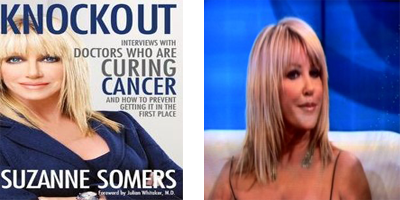 When it comes to her health, actress, anti-aging expert and best-selling author Suzanne Somers doesn’t hesitate to reject conventional treatments. When she was diagnosed with breast cancer 11 years ago she chose alternative therapies that stunned the mainstream medical community.  Once again, she’s taken the revolutionary route by undergoing an experimental procedure using her own stem cells and body fat to rebuild her withered breast.

Somers detailed her alternative journey and boasted about her quality of life to Dr. Oz on his show last Friday.

“Look at me,” she told Dr. Oz. “Eleven years later, I am so healthy. I’ve had this incredible quality of life all of these years.”

After she was diagnosed with breast cancer in 2000 it took about two days for her to recover from the shocking news.

“I woke up, looked at my husband and said, ‘I can handle this.’ And then it was like I went to war and I was going to do it my way,” she said.

And so she did. She was offered the standard of care: a lumpectomy, radiation, chemotherapy and after-care drugs and told to give up bioidentical hormones, which she refused to do despite her doctor telling her she would die if she didn’t. She believed keeping her hormones balanced would help her prevent a cancer recurrence following the lumpectomy.

But she did agree to radiation, which she was told would be a “walk in the park.” Hardly. She vomited daily throughout each day and spent much of the time curled in a fetal position. The radiation eventually left her with a “withered, nearly pancake breast on the right side (barely a B cup) and my full natural breast on the left side (a D cup),” she writes on her website.

“Here I am a sex symbol and I have one and one-third breasts,” she said to Dr. Oz. “…I could write a book, What They Don’t Tell You about Radiation.
After researching chemotherapy and being dissatisfied with its success rate, or lack thereof, she rejected that treatment. “Looking back, it was the best thing I ever did,” she said.

To help prevent a recurrence of cancer, she was injected with Iscador, which is extracted from mistletoe, for eight years. She also “ate as if my life depended on it” and still does. She grows her own food, buys organic and when she can’t get organic she loads up on antioxidants to kill free radicals.  She also continued taking her bioidentical hormones and opted against reconstruction because she didn’t want an implant.

“As an avid participant in anti-aging and alternative medicine, I instead searched for another option. I heard about Dr. Kotaro Yoshimura who has been performing stem cell breast reconstruction in Japan, but it was not legally available to women in this country. After years of research and international travel, I was able to assist a remarkable group of doctors in having an IRB (International Review Board) set up at Hollywood Presbyterian Hospital in California. I considered going to Japan for the surgery, but I wanted to help open the door for women in America. I am proud to say I am the first person in this country to initiate the clinical trial for a stem cell breast reconstruction at Hollywood Presbyterian Hospital. Dr. Joel Aronowitz (who trained with Yoshimura in Japan) was the lead surgeon, along with Dr. James Watson. This procedure used my own adult stem cells, harvested from my fat, then reinjected into my breast to “regrow” my breast to its original size. While I don’t yet have long-term results, I can say the initial results are nothing short of miraculous.”

If ever there was a poster child for alternative therapies and being in control of your own health, it is Somers, who says, “It is so wonderful for all people to know how your body works and to understand the fuel, which is in good nutrition, and to know the questions to ask when you are having any kind of procedure so that you can be in charge of your body because nobody will care as much about your body as you.”