The debate is over!  Humans are anatomically and physiologically designed to eat only plant food. Homo sapiens (humans) are classified broadly as land mammals and more specifically as tailless primates.  Our closest cousins, gorillas, bononobos and chimps eat predominantly plant material with a few insects here and there.  Chimps will, on occasion eat flesh foods but is it more “ceremonial” to demonstrate territorial claims and celebrate won skirmishes with other tribes, but this is rare. 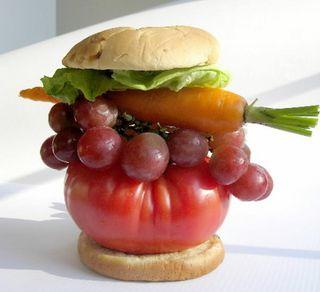 Furthermore, the China Study by T. Colin Campbell, PhD, a professor emeritus from Cornell University whose career has been dedicated, in large part, to protein consumption and its’ effect on humans has clearly demonstrated what the effect animal protein has on the health and wellbeing of humans.  His thirty-five years of NIH granted research and studies performed by others elsewhere demonstrate a clear causal (cause and effect) relationship between the consumption of animal protein and cancer, cardiovascular disease and other chronic conditions found only in humans and domesticated animals fed the human version of “food” rather than what these would consume naturally, out of instinct, had they not been domesticated and left without the choice of what to eat.

If one were to clear away the biases which configure their mind, and hence color and frame its’ perceptions, and engage in a thorough investigation of the subject of human nutrition, it becomes utterly clear that we thrive on plant foods to the degree that robust health is the norm and this phantom, called disease is only the body attempting to maintain balance.